I can’t complete 1954, without doing Annie Lennox Part One, so let’s get started, and see what I found out about her. I have some albums, to upload on my blogs, so please enjoy.

Ann Lennox OBE (birthed 25 December 1954) is a Scottish singer-songwriter, political activist and philanthropist. After achieving moderate success in the late 1970s as part of the new wave band The Tourists, she as well as fellow musician Dave Stewart went on to accomplish worldwide success in the 1980s as Eurythmics. Appearing in the 1983 music video for “Sweet Dreams (Are Made of This)“ with orange cropped hair and also wearing a man‘s business suit, the BBC states, “all eyes were on Annie Lennox, the singer whose powerful androgynous look defied the male gaze“. Succeeding hits with Eurythmics consist of “There Must Be an Angel (Playing with My Heart)“ and “Here Comes the Rain Again“. 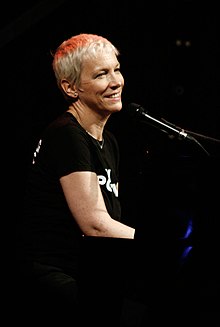 Annie Lennox performing at the Rally for Human Rights throughout the International AIDS Conference 2010 in Vienna as part of her SING Campaign.

The Catch., The Tourists., Eurythmics.

Lennox started a solo career in 1992 with her debut album, Diva, which produced several hit singles including “Why“ and “Walking on Broken Glass“. The very same year, she performed “Love Song for a Vampire“ for Bram Stoker‘s Dracula. Her 1995 studio album, Medusa, includes “No More I Love You‘s“ as well as “A Whiter Shade of Pale“. To date, she has released six solo studio albums and also a compilation album, The Annie Lennox Collection(2009). With eight Brit Awards, that includes being named Best British Female Artist a record six times, Lennox has actually been named the “Brits Champion of Champions“. She has also collected four Grammy Awards and an MTV Video Music Award. In 2002, Lennox received a Billboard Century Award; the highesthonor from Billboard magazine. In 2004, she received both the Golden Globe as well as the Academy Award for Best Original Song for “Into the West“, written for the soundtrack to the feature film The Lord of the Rings: The Return of the King.

Lennox‘s vocal range is contralto. She has actually been called “The Greatest White Soul Singer Alive“ by VH1 and also one of The 100 Greatest Singers of All Time by Rolling Stone. In 2012, she was ranked No. 22 on VH1‘s 100 Greatest Women in Music. She has actually gained the distinction of “most successful female British artist inUK music history“. Since June 2008, including her work with Eurythmics, Lennox had actually sold over 80 million records worldwide. As part of a one-hour symphony of British Music, Lennox performed “Little Bird“ during the 2012 Summer Olympics closing ceremony in London. At the 2015 Ivor Novello Awards, Lennox was made a fellow of the British Academy of Songwriters, Composers and Authors, the very first woman to receive the honor.
Along with her career as a musician, Lennox is also a political as well as social activist, noteworthy for raising money and also awareness for HIV/ AIDS as it impacts women and children in Africa. In 2011, Lennox was appointed an OBE by Queen Elizabeth II for her “tireless charity campaigns and championing of humanitarian causes“. On 4 June 2012 she performed at the Queen‘s Diamond Jubilee Concert in front of Buckingham Palace. In 2017, Lennox was appointed Glasgow Caledonian University‘s very first female chancellor.

Annie Lennox was born on Christmas Day 1954 in Summerfield Maternity Hospital, Aberdeen, the daughter of Dorothy Farquharson (née Ferguson;birthed 1930) Thomas Allison Lennox (1925— 1986).
In the 1970s, Lennox won a place at the Royal Academy of Music in London, where she studied the flute, piano and harpsichord for three years. She lived on a student loan as well as worked at part-time work for additional money. Lennox was miserable during her time at the Royal Academy and also spent her free time questioning what other direction she might take.
Lennox‘s flute teacher‘s final report mentioned: “Ann has not always been sure of where to direct her efforts, though lately she has been more committed. She is very, very able, however.“ Two years later on, Lennox reported to the Academy: “I have had to work as a waitress, barmaid, and shop assistant to keep me when not in musical work.“ She also played as well as sang with a couple of bands, such as Windsong, throughout the duration of her course. In 2006, the academy made her an honorary Fellow. Lennox also was made a Fellow of the Royal Scottish Academy of Music andDrama that year. 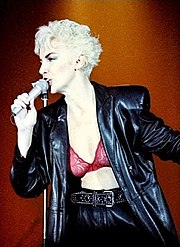 Lennox in the mid-1980s
In 1976, Lennox was a flute player with a band called Dragon‘s Playground, leaving prior to they appeared on TV‘s New Faces. Between 1977 and 1980, she was the lead singer of The Tourists, a British pop band and also her first collaboration with Dave Stewart.

Lennox and Stewart‘s second collaboration, the 1980s synth-pop duo Eurythmics, led to her most notablepopularity, as the duo‘s alto, soul-tinged lead singer. Early in Eurythmics‘ career, Lennox was recognized for her androgyny, wearing suits as well as once impersonating Elvis Presley. Eurythmics released a long line of singles in the 1980s, including “Sweet Dreams (Are Made of This)“ (a U.S. number one and also UK number two), “There Must Be an Angel(Playing with My Heart)“ (UK number one), “Love Is A Stranger“, “Here Comes the Rain Again“, “Sisters Are Doin‘ It for Themselves“, “Who‘s That Girl?“, “Would I Lie to You?“, “Missionary Man“, “You Have Placed a Chill in My Heart“, “Thorn in My Side“, “The Miracle of Love“ and “Don’t Ask Me Why“. Although the Eurythmics neverformally disbanded, Lennox made a relatively clear break from Stewart in 1990. Afterwards, she started her solo career.

Lennox (far right) and also David A. Stewart (left) performing as Eurythmics in 1987.
Lennox and Stewart reunited Eurythmics in the late 1990s with the album Peace, their first album of new material in ten years. A subsequent concert tour was completed, with earnings going to Greenpeace as well as Amnesty International. Lennox has received eight Brit Awards, including being named Best British Female Artist a record six times. Four of the awards were given throughout her time with Eurythmics, and also another was given to the duo for Outstanding Contribution to Music in 1999.
The 1988 single, “Put a Little Love in Your Heart“, was a duet with Al Green recorded for the soundtrack of the film Scrooged. Though it was produced by Dave Stewart, it was credited to Lennox and Green. This one-off single peaked at No. 9 on the U.S. Billboard Hot 100 as well as was a top 40 hit in the UK. Lennox performed the song “Ev’ry Time We Say Goodbye“, a Cole Porter song, that very same year for a cameo appearance in the Derek Jarman film Edward II. She then appeared with David Bowie and also the surviving members of Queen at 1992‘s Freddie Mercury Tribute Concert at London‘s Wembley Stadium, performing “Under Pressure“.
1992— 1993: Diva

Lennox started working with former Trevor Hornprotégé Stephen Lipson, starting with her 1992 solo début album, Diva. It was a commercial and critical success, charting No. 1 in the UK, No. 6 in Germany, as well as No. 23 in the U.S. where it went double platinum. Lennox‘s profile was boosted by Diva‘s singles, that included “Why“ and also “Walking on Broken Glass“. “Why” won an MTV Award for Best Female Video at the 1992 MTV Video Music Awards, while the video for “Walking on Broken Glass“ set in the Rococo period, included actors Hugh Laurie and John Malkovich. “Little Bird“ also formed a double A-side with “Love Song for a Vampire“, a soundtrack cut for Francis Ford Coppola‘s 1992 film Bram Stoker‘s Dracula. The B-side of her single “Precious“ was a self-penned song called “Step by Step“, which was later on a hit for Whitney Houston for the soundtrack of the film The Preacher‘s Wife. The song “Keep Young and Beautiful“ was included on the CD release as a bonus track (the original vinyl album had just ten tracks).

Although Lennox‘s profile decreased for a period due to her desire to raise her two kids outside of the media‘s glare, she continued to record. Her second album, Medusa, was released in March 1995. It consisted entirely of cover songs, all originally recorded by male artists including Bob Marley, The Clash, and Neil Young. It entered the UK album chart at No. 1 as well as peaked in the US at number 11, spending 60 weeks on the Billboard 200 chart and also selling over 2,000,000 to date in the USA. It has actually achieved double platinum status in both the UK and the US. The album generated four UK singles: “No More I Love You‘s“ (which entered the UK singles chart at No. 2, Lennox‘s highest ever solo peak), “A Whiter Shade of Pale“, “Waiting in Vain“ and “Something So Right“. The album was nominated for Best Pop Vocal Album at the Grammy Awards of 1996, losing to Turbulent Indigo by Joni Mitchell, however, Lennox won the Grammy Award for Best Female Pop Vocal Performance for the single “No More I Love You‘s“. Although Lennox declined to tour for the album, she did perform a large scale one-off concert in New York‘s Central Park, which was filmed as well as later released on home video. Lennox provided an extensive solo vocal performance (without lyrics) for the soundtrack score of the film Apollo 13 in 1995.
Managed by Simon Fuller since the beginning of her solo career, he stated that Lennox played an important but unheralded role in the success of the Spice Girls, encouraging the group to “ham up“ their character, which helped them top the charts around the world. In 1997, Lennox re-recorded the Eurythmics track “Angel“ for the Diana, Princess of Wales: Tribute album, and likewise recorded the song “Mama“ for The Avengers soundtrack album. In 1998, following the death of a mutual friend (former Tourists member Peet Coombes), she re-united with Dave Stewart. Following their first performance with each other in eight years at a record company party, Stewart and also Lennox started writing and recording together for the first time since 1989. This led to the album Peace. The title was designed to reflect the duo‘s ongoing concern with worldwide conflict as well as world peace. The record was promoted with a concert on the Greenpeace vessel Rainbow Warrior II, where they played a mixture of old and also new songs. “I Saved the World Today“ was the lead single, reaching number eleven on the UK singles chart. An additional single, released at the star of 2000, “17 Again“, made the UK top 40, and topped the US dance chart. In 2002, Lennox received a Billboard Century Award; the highest accolade from Billboard Magazine, with Editor-in-Chief Timothy White describing her as one of “the most original and unforgettably affecting artists in the modern annals of popular music.“