You might not have heard of them, but I have, so that’s why Midnight Cowboy Ferrante And Teicher is on my website. I care for who I like, besides, I have enough of different artists that I can indulge on my blogs. Skip if you like, but I’m doing this one today, and I hope you read up on them.

Ferrante & Teicher were a duo of American piano players, recognized for their light arrhttp://mckennamusicaljubilee.com/wp-admin/profile.phpangements of familiar classical pieces, film soundtracks, and show tunes, in addition to their trademark style of florid, intricate as well as fast-paced piano playing performances.

I been trying to finish this blog for quite a few years. I kept pushing it off since My parents was deciding on a name for my birth certificate. I had it done, except for the title then it hit me (OW, that hurt), why don’t I call it Elton John Part Two, so everyone will think there’s two blogs and this is the second, which it is. I hope you read this one, so you can find the first one, before I upload the third one, (or is it “before I upload the third “three”).

At age 15, with his mom‘s and stepfather‘s assistance, John was hired as a pianist at a neighboring bar, the Northwood Hills Hotel, playing Thursday to Sunday nights. Recognized simply as “Reggie“, he played a variety of popular sta...

Today, I’m doing Elton John Part One, however, I don’t know why I haven’t done him before. For all you, who search my website, I’ll try to do some more blogs of him this week, so please come often.

Sir Elton Hercules John CBE (born Reginald Kenneth Dwight; 25 March 1947) is an English singer, songwriter, pianist, and composer. He has collaborated with lyricist Bernie Taupin since 1967; they have worked together on more than 30 albums. John has sold more than 300 million records, making him one of the world‘s best-selling music artists. He has more than fifty Top 40 hits, in addition to seven consecutive number-one albums in the USA, 58 Billboard Top 40 singles, 27 Top 10 singles, four of which peaked at number

I can’t remember, how many times I heard “Hotel California”, but I still stop what I’m doing just to listen to it, and for that reason, I’m doing Don Henley Part One.

Donald Hugh Henley (born July 22, 1947) is an American musician, singer, songwriter, record producer and founding member of Eagles. He was the drummer and co-lead vocalist for Eagles from 1971 until the band broke up in 1980, and he reprised those duties for the group‘s reunions since 1994. He has been the only constant member of the band since its formation. Henley sang the lead vocals on Eagles hits such as “Witchy Woman“, “Desperado“, “Best of My Love“, “One of TheseNights“, “Hotel California“, “Life in the Fast Lane“, “The Long Run“ and “Get Over It“.

I’m looking forward to know what you think of my blog Rupert Holmes Part Two, because this may not be my last, blog of “Him”.

Holmes made his professional debut as a playwright with the musical The Mystery of Edwin Drood, later known as Drood, in 1985. He was encouraged to write a musical by Joseph Papp and his wife after they attended one of Holmes‘s cabarets in 1983. The result, loosely based on the Charles Dickens unfinished novel, and inspired by Holmes‘s memories of English pantomime shows he attended as a child, was a hit in New York‘s Central Park and on Broadway. Because Dickens left the novel unfinished at his death, Holmes employed the unusual device of providing alternate endings for each character wh...

This is her life in liza Minnelli Part Four, please read and then listen to her album. It’s the second disc, which is good as the first one.

Minnelli has long suffered from alcoholism and has been addicted to prescription drugs, originating from a Valium prescription after her mother died. Her use of recreational drugs in the 1970s was noted by Andy Warhol, who in a 1978 diary entry recalled Minnelli arriving at Halston‘s house and imploring the host to“Give me every drug you‘ve got.“ Along with Warhol and Bianca Jagger, Minnelli made frequent appearances at New York City nightclubs during the late 1970s. Minnelli left her 1984 musical The Rink to enter the Betty Ford Clinic.
Minnelli has stated that she i...

This is Rupert Holmes Part One, please come back for Part Two.

Rupert Holmes (born David Goldstein on February 24, 1947) is a British-Americancomposer, singer-songwriter, musician, dramatist and author. He is widely known for the hit singles “Escape (The Piña Colada Song)“ (1979) and “Him“ (1980 ). He is also known for his musicals Drood, which earned him two Tony Awards, and Curtains, and for his television series Remember WENN.

Here’s Ronnie Wood Part Three, and I will try to find more information about him in the future. 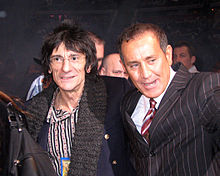 Wood with promoter Joseph Donofrio, 2006.
Wood was born in Hillingdon, 14 miles west of London, into a family of English“water gypsies“ (river/canal barge operators, sometimes also called “bargees“). He has said that his generation was the first in the family to be born on dry land. He grew up in Yiewsley and attended St. Stephen‘s Infant School, St.Matthew‘s Church of England Primary School and St. Martin‘s C of E Secondary Modern School West Drayton. Wood is a fan of English Championship football club West Bromwich Albion
Both of his older brothers, Art and Ted, were graphic artists as well asmusicians. Ted Wo...
Read More

I just got a new album, from iTunes, so I’m happy to type you, David Bowie Part Six, as well as my other five blogs of David Bowie. 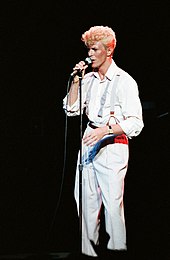 Serious Moonlight Tour, 1983
Scary Monsters and Super Creeps ( 1980) produced the number-one hit “Ashes toAshes“, featuring the textural work of guitar-synthesist Chuck Hammer and revisiting the character of Major Tom from “Space Oddity“. The song gave international exposure to the underground New Romantic movement when Bowie visited the London club “Blitz“— the main New Romantic hangout— to recruit several of the regulars (including Steve Strange of the band Visage) to act in the accompanying video, renowned as one of the most innovative of all time. Wh...
Read More

I’m listening to his album on vinyl, but you’ll be hearing the same one from iTunes on this blog, Ronnie Wood Part Two.

Throughout the 1980s, Wood played as an official member of the Rolling Stones; continued his solo career, releasing the album 1234 in 1981; painted; and collaborated with a number of other artists, including Prince, Bob Dylan, David Bowie, Eric Clapton, Bo Diddley, Ringo Starr and Aretha Franklin.

At the 1985 Live Aid Concert in Philadelphia, Wood along with Keith Richards performed in the penultimate set with Bob Dylan. During the performance of“Blowin‘ in the Wind“, one of Dylan‘s guitar strings broke. Wood gave Dylan his guitar to keep the performance seamless and played air guitar until a stag...