I’m so happy to do David Cassidy Part One, because I grew up with The Partridge Family, and I have all of their vinyl records and his solo albums on vinyl as well.

David Bruce Cassidy (April 12, 1950— November 21, 2017) was an American actor, singer, songwriter, and guitarist. He was known for his role as Keith Partridge, the son of Shirley Partridge (played by his stepmother, Shirley Jones), in the 1970s musical-sitcom The Partridge Family. This role catapulted Cassidy to teen idol status as a superstar pop singer of the 1970s.

Cassidy was born at Flower Fifth Avenue Hospital in New York City, the son of singer and actor Jack Cassidy and actress Evelyn Ward. His father was of half Irish and half German ancestry, and his mother was descended mostly from Colonial Americans, along with some Irish and Swiss roots. His mother‘s ancestors were among the founders of Newark, New Jersey.
As his parents were frequently touring on the road, he spent his early years being raised by his maternal grandparents in a middle-class neighborhood in West Orange,New Jersey. In 1956, he found out from neighbors‘ children that his parent shad been divorced for over two years and had not told him.
In 1956, Cassidy‘s father married singer and actress Shirley Jones. They had three children: David‘s half-brothers, Shaun (b. 1958), Patrick (b. 1962), and Ryan (b.1966). In 1968, after completing one final session of summer school to obtain credits necessary to get a high-school diploma, David moved into the rental home of Jack Cassidy and Shirley Jones in Irvington, New York, where his half-brothers also lived. David remained there, seeking fame as an actor/musician, while simultaneously working half-days in the mailroom of a textile firm. He moved out when his career began to flourish.

Cassidy‘s father, Jack, is credited with setting his son up with his first manager. After signing with Universal Studios in 1969, Jack introduced him to former table tennis champion and close friend Ruth Aarons, who later found her niche as a talent manager, given her theater background. Aarons had represented Jack and Shirley Jones for several years, and later represented Cassidy‘s half-brother, Shaun. Aarons became an authority figure and close friend to Cassidy, and was the driving force behind his on-screen success. After Cassidy made small wages from Screen Gems for his work on The Partridge Family during season one, Aarons discovered that he had been underage when he signed his contract; she then renegotiated the contract with far superior provisions and a rare four-year term.

On January 2, 1969, Cassidy made his professional debut in the Broadway musical The Fig Leaves Are Falling. It closed after four performances, but a casting director saw the show and asked Cassidy to make a screen test. In 1969, he moved to Los Angeles. After signing with Universal Studios in 1969, Cassidy was featured in episodes of the television series Ironside, Marcus Welby, M.D., Adam-12, Medical Center and Bonanza.

Publicity photo for The Partridge Family, 1972
In 1970, Cassidy took the role of Keith Partridge on the musical television show The Partridge Family. After demonstrating his singing talent, Cassidy was allowed to join the studio ensemble as the lead singer. The show proved popular, but the fame took its toll on Cassidy. In the midst of his rise to fame, Cassidy felt stifled by the show and trapped by the mass hysteria surrounding his every move. In May 1972, to alter his public image, he appeared nude on the cover of Rolling Stone in a cropped Annie Leibovitz photo; among other things, the accompanying Rolling Stone article mentioned that Cassidy was riding around New York in the back of a car “stoned and drunk.“
Once “I Think I Love You“— the first single released by The Partridge Family pop group— became a hit, Cassidy began work on solo albums. Within the first year, he had produced his own single, a cover of The Association‘s “Cherish“ (from the album of the same title); the song reached number nine in the United States, number two in the United Kingdom (a double A-side with “Could It Be Forever“), and number one in Australia and New Zealand. He began tours that featured Partridge tunes and his own hits. Cassidy achieved far greater solo chart success in the UK than in his native America, including a cover of The Young Rascals‘ “How Can I Be Sure“ and the double A-side single “Daydreamer“/ “The Puppy Song“— two UK number ones which failed to chart in the States. In Britain, Cassidy the solo star remains best known for “Daydreamer“, “How Can I Be Sure“ and “Could It Be Forever“(UK number 2/US number 37), all released during his 1972— 73 solo chart peak. Though he wanted to become a respected rock musician along the lines of Mick Jagger, his channel to stardom launched him into the ranks of teen idol, a brand he loathed until much later in life, when he managed to come to terms with his bubblegum pop beginnings.
Ten albums by The Partridge Family and five solo albums by Cassidy were produced during the series, with most selling more than a million copies each. Internationally, Cassidy‘s solo career eclipsed the already phenomenal success of The Partridge Family. He became an instant drawing card, with sellout concert successes in major arenas around the world. These concerts produced mass hysteria, resulting in the media coining the term “Cassidymania“. For example, he played to two sellout crowds of 56,000 each at the Houston Astrodome in Texas over one weekend in 1972. His concert in New York‘s Madison Square Garden sold out in one day and resulted in riots after the show. His concert tours of the United Kingdom included sellout concerts at Wembley Stadium in 1973. In Australia in 1974, the mass hysteria was such that calls were made to have him deported from the country, especially after the madness at his 33,000-person audience concert at Melbourne Cricket Ground. 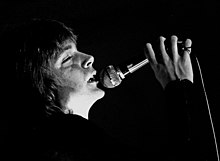 Cassidy performing in 1973
A turning point in Cassidy‘s live concerts (while still filming The Partridge Family) was a gate stampede which killed a teenage girl. At a show in London‘s White City Stadium on May 26, 1974, nearly 800 were injured in a crush at the front of the stage. Thirty were taken to the hospital, and one, 14-year-old Bernadette Whelan, died four days later at London‘s Hammersmith Hospital without regaining consciousness, after the excitement and press of the crowd caused a pre-existing heart condition to trigger cardiac arrest. The show was the penultimate date on a world tour. A deeply affected Cassidy faced the press,trying to make sense of what had happened. Out of respect for the family and to avoid turning the girl‘s funeral into a media circus, Cassidy did not attend the service, although he spoke to Whelan‘s parents and sent flowers. Cassidy stated at the time that this would haunt him until the day he died.
I‘m exploited by people who put me on the back of cereal boxes. I asked my housekeeper to go and buy a certain kind of cereal and when she came home, there was a huge picture of me on the back. I can’t even eat breakfast without seeing my face.— New Musical Express, October 1972. By this point, Cassidy had decided to quit both touring and acting in The Partridge Family, concentrating instead on recording and songwriting. International success continued, mostly in Great Britain, Germany, Japan and South Africa, when he released three well-received solo albums and several hit singles on RCA in 1975 and 1976. Cassidy became the first recording artist to have a hit with “I Write the Songs“, peaking at # 11 in the Top 40 in Great Britain before the song became Barry Manilow‘s signature tune. Cassidy‘s recording was produced by the song‘s author-composer, Bruce Johnston of The Beach Boys.
In 1978, Cassidy starred in an episode of Police Story titled “A Chance to Live“, for which he was nominated for an Emmy Award. NBC created a series based on it, called David Cassidy: Man Undercover, but it was cancelled after one season. Adecade later, the successful Fox series 21 Jump Street used the same plot, with different youthful-looking police officers infiltrating a high school.