In the history of music, their had never been a woman drummer, which is the lead singer, and wrote songs, like her. Karen Carpenter Part One, will be the first, to do so, and so far, the only one that ever will.

Karen Anne Carpenter (March 2, 1950— February 4, 1983) was an American singer and drummer who was part of the duo the Carpenters alongside her brother Richard. She was praised for her contralto vocals, and her drumming abilities were viewed positively by other musicians and critics. Her struggles with eating disorders would later raise awareness of anorexia and body dysmorphia. 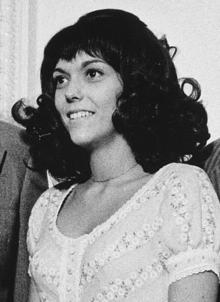 Carpenter at the White House in August 1972


Carpenter was born in New Haven, Connecticut, and moved to Downey, California, in 1963 with her family. She began to study the drums in high school and joined the Long Beach State choir after graduating. After several years of touring and recording, the Carpenters were signed to A&M Records in 1969, achieving commercial and critical success throughout the 1970s. Initially, Carpenter was the band‘s full-time drummer, but gradually took the role of front woman as drumming was reduced to a handful of live showcases or tracks on albums. While the Carpenters were on hiatus in the late 1970s, she recorded a solo album, which was released years after her death.

Carpenter had the eating disorder anorexia nervosa, which was little-known at the time, and was briefly married in the early 1980s. She died at age 32 from heartfailure caused by complications related to her illness. Her death led to increased visibility and awareness of eating disorders. Her work continues to attract praise, including being listed among Rolling Stone‘s 100 greatest singers of all time.

Karen Anne Carpenter was born on March 2, 1950, in New Haven, Connecticut, the daughter of Agnes Reuwer (née Tatum, March 5, 1915— November 10, 1996) and Harold Bertram Carpenter (November 8, 1908— October 15, 1988). Harold was born in Wuzhou, China, where his parents were missionaries. He was educated at boarding schools in England before finding work in the printing business.
Carpenter‘s only sibling, Richard, the elder by three years, developed an interestin music at an early age, becoming a piano prodigy. Karen‘s first words were “bye-bye“ and “stop it“, the latter spoken in response to Richard. She enjoyed dancing and by age four was enrolled in tap dancing and ballet classes.
The family moved in June 1963 to the Los Angeles suburb of Downey after Harold was offered a job there by a former business associate. Carpenter entered Downey High School in 1964 at age 14 and was a year younger than her classmates. She joined the school band, initially to avoid gym classes. Bruce Gifford, the conductor (who had previously taught her older brother), gave her the glockenspiel, an instrument she disliked, and after admiring the performance of her friend and classmate, drummer Frankie Chavez (who had been playing from an early age and idolized jazz drummer Buddy Rich), she asked if she could play those instead. Carpenter wanted a Ludwig drum set because it was used by her favorite drummers, Joe Morello and Ringo Starr. Chavez persuaded her family to buy her a $300 (the equivalent of $2,400 in 2018) Ludwig kit, and he began to teach her how to play. Her enthusiasm for drumming led to teaching herself how to play complicated lines, and studying the difference between traditional and matched grip. Within a year, she could play in complex time signatures, such as the 5.
4 in Dave Brubeck‘s “Take Five“.
Carpenter was initially nervous about performing in public, but said she “was too involved in the music to worry about it“. She graduated from Downey High School in the spring of 1967, receiving the John Philip Sousa Band Award, and enrolled as a music major at Long Beach State where she performed in the college choir with Richard. The choir‘s director, Frank Pooler, said that Karen had a good voice that was particularly suited to pop, and gave her lessons in order for her to develop a three-octave range.

Karen Carpenter drumming on stage, early 1970s
Carpenter‘s first band was Two Plus Two, an all-girl trio formed with friends from Downey High. They split up after she suggested her brother Richard join the group. In 1965, Karen, Richard, and his college friend Wes Jacobs, a bassist and tuba player, formed the Dick Carpenter Trio. The band rehearsed daily, played jazz in nightclubs, and also appeared on the TV talent show Your All-American College Show. Richard was immediately impressed with his sister‘s musical talent, saying she would “speedily maneuver the sticks as if she had been born in a drum factory“. She did not sing at this point; instead, singer Margaret Shanor guested on some numbers. The trio signed a contract with RCA Records and recorded two instrumentals, but they were not released.
In April 1966, the Carpenters were invited to audition at a session with bassist Joe Osborn, well known for being part of the studio-musician collective The Wrecking Crew. Though she was initially expected to just be the drummer, Karen tried singing and impressed everyone there with her distinctive voice.  Osborn signed a recording contract with her for his label, Magic Lamp Records; he was not particularly interested in Richard‘s involvement.
In 1967, Jacobs left the trio to study at the Juilliard School, and the Carpenter siblings were keen to try out other musical styles. Along with other musicians, including Gary Sims and John Bettis, the siblings formed the group Spectrum, which focused on a harmonious vocal sound and recorded many demo tapes in Osborn‘s garage studio, working out how to overdub voices onto multitrack tape. Many of those tapes were rejected by record companies. The group had difficulty attracting a live following, as their sound was too dissimilar from the hard rock and psychedelic rock then popular in clubs.
A&M Records finally signed the Carpenters to a recording contract in 1969. Karen started out as both the group‘s drummer and co-lead singer, and she originally sang all her vocals from behind the drum set. She sang most of the songs on the band‘s first album, Offering (later retitled Ticket to Ride); her brother wrote ten out of the album‘s thirteen songs and sang on five of them. The opening and concluding tracks were sung by both siblings in unison. As well as drumming, Karen played bass guitar on two songs, “All of My Life“ and “Eve“, under Osborn‘s guidance. On “All I Can Do“, she played in 5/4 time, while “Your Wonderful Parade“ featured multiple snare and bass drum overdubs to emulate the sound of a marching band. The track “Ticket to Ride“, which was a cover of a Beatles song that later became the album‘s title track, was released as the Carpenters‘ first single; it reached No. 54 on the Billboard Hot 100. Their next album, 1970‘s Close to You, featured two hit singles: “(They Long to Be)Close to You“ and “We‘ve Only Just Begun“. They peaked at No. 1 and No. 2, respectively, on the Hot 100.
Because she was just 5 feet 4 inches (1.63 m) tall, it was difficult for people in the audience to see Karen behind her kit. After reviews complained that the group had no focal point in live shows, Richard and manager Sherwin Bash persuaded her to stand at the microphone to sing the band‘s hits while another musician played the drums (former Disney Mouseketeer Cubby O’Brien served as the band‘s other drummer for many years). She initially struggled in live performances singing solo, as she felt more secure behind the drum kit. After the release of Now & Then in 1973, the albums tended to have Carpenter singing more and drumming less, and she did become the focal point of all records and live performances; Bash said “she was the one that people watched“. Starting with the Carpenters‘ 1976 concert tour and continuing thereafter, she would perform a showcase where she moved around the stage playing various configurations of drums. Her studio performances benefited from close miking that captured the nuancesof her voice well. Though she had a three-octave range, many of the duo‘s hits prominently feature her lower contralto singing, leading her to quip, “The money‘s in the basement“. 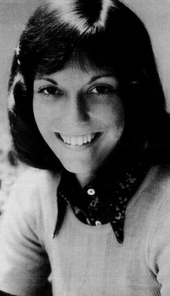 A promotional photograph of Carpenter from 1973
Carpenter always considered herself a “drummer who sang“. She preferred Ludwig Drums, including the Ludwig Super Sensitive snare, which she favored greatly. However, she did not drum on every Carpenters‘ recording. She was the only featured drummer on Ticket to Ride and on Now & Then, except for“Jambalaya“.  According to Hal Blaine, Karen played on many of the album cuts and he played on most of the Carpenters‘ studio sessions where she did not play drums herself.  The duo were happy for Blaine to take the role in the studio as he was a respected session musician and it was easier to record Carpenter‘s guide vocal without it spilling onto the drum mics. Blaine complimented Karen‘s drumming skills, but believed her greatest strength was as a vocalist and thought himself more adept at work in a recording studio which required a different approach from her experience drumming live onstage for an audience. On Made in America, Karen provided percussion on “Those Good Old Dreams“ in tandem with Paulinho da Costa, and played drums on the song “When it‘sGone (It‘s Just Gone)“ in unison with Larrie Londin.
In the mid-1970s Richard Carpenter developed an addiction to Quaaludes. The Carpenters frequently canceled tour dates, and they stopped touring altogether after their September 4, 1978, concert at the MGM Grand in Las Vegas. In 1980,Karen performed a medley of standards in a duet with Ella Fitzgerald on the Carpenters‘ television program Music, Music, Music. In 1981, after release of the Made in America album (which turned out to be their last), the Carpenters returned to the stage and did some promotional tours, including an appearance for the BBC program Nationwide.
“ Now“ was the last song Carpenter recorded, in April 1982. Though Richard was concerned about her health, he still thought her voice sounded as good as ever.