Natalie Cole Part One, is about her early life and career. Knowing that she sung with her dad Nat King Cole, and having a career on her own, should make any singer feel good about herself.

Natalie Maria Cole (February 6, 1950— December 31, 2015) was an American singer, voice actress, songwriter, and actress. Cole was the daughter of American singer and jazz pianist Nat King Cole. She rose to success in the mid-1970s as an R&B singer with the hits “This Will Be“, “Inseparable“ (1975 ), and “Our Love“ (1977). She returned as a pop singer on the 1987 album Everlasting and her cover of Bruce Springsteen‘s “Pink Cadillac“. In the 1990s, she sang traditional pop by her father, resulting in her biggest success, Unforgettable … with Love, which sold over seven million copies and won her seven Grammy Awards. She sold over 30 million records worldwide. On December 31, 2015, Cole died at the age of 65 at Cedars-Sinai Medical Center in Los Angeles, California, due to congestive heart failure.

Natalie Cole was born at Cedars of Lebanon Hospital in Los Angeles, to American singer and jazz pianist Nat King Cole and former Duke Ellington Orchestra singer Maria Hawkins Ellington, and raised in the affluent Hancock Park district of Los Angeles. Regarding her childhood, Cole referred to her family as “the black Kennedys“ and was exposed to many great singers of jazz, soul and blues. At the age of 6, Natalie sang on her father‘s Christmas album : The Magic of Christmas and later started performing at age 11.

Cole grew up with an older adopted sister, Carole “Cookie“ Cole (1944— 2009) (her mother Maria‘s younger sister‘s daughter), adopted brother Nat “Kelly“ Cole (1959— 95), and younger twin sisters Timolin and Casey (born 1961). Through her mother, Cole was a grandniece of educator Charlotte Hawkins Brown.
Her paternal uncle Freddy Cole is a singer and pianist with numerous albums andawards. Cole enrolled in Northfield School for Girls, an elite New England preparatory school (since 1971 known as Northfield Mount Hermon School) before her father died of lung cancer in February 1965. Soon afterwards she began having adifficult relationship with her mother. She enrolled in the University of Massachusetts Amherst. She transferred briefly to University of Southern California where she pledged the Upsilon chapter of Delta Sigma Theta sorority. She later transferred back to the University of Massachusetts, where she majored in Child Psychology and minored in German, graduating in 1972. 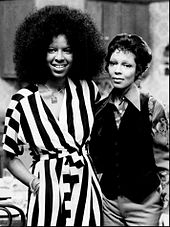 Cole grew up listening to a variety of music that included Aretha Franklin and Janis Joplin. After graduation in 1972 she began singing at small clubs with her band, Black Magic. Clubs initially welcomed her because she was Nat King Cole‘s daughter, only to be disappointed when she began singing cover versions of R&B and rock songs.

With the assistance of Chuck Jackson and Marvin Yancey, a songwriting and producing duo, she recorded some songs in a studio in Chicago that was owned by Curtis Mayfield. Her demo tapes led to a contract with Capitol, resulting in the release of Cole‘s debut album, Inseparable, which included songs that reminded listeners of Aretha Franklin. Franklin later contended that songs such as “This Will Be“, “I Can’t Say No“, and others were offered to her while she was recording the album You but she had turned them down. Released in 1975, the album became an instant success thanks to “This Will Be“, which became a top ten hit and won her a Grammy Award for Best Female R&B Vocal Performance. A second single,“Inseparable“, also became a hit. Both songs reached number-one on the R&B chart.Cole also won Best New Artist at the Grammy Awards for her accomplishments, making her the first African-American artist to attain that feat. The media‘s billing of Cole as the “new Aretha Franklin“ started a rivalry between the two singers. The feud boiled over at the 1976 Grammy Awards when Cole beat Franklin in the Best Female R&B Vocal Performance category, a category which Franklin had won eight times before losing to Cole.

Becoming an instant star, Cole responded to critics who predicted a sophomoreslump with Natalie, released in 1976. The album, like Inseparable, became a gold success thanks to the funk-influenced cut “Sophisticated Lady“ and the jazz-influenced “Mr. Melody“.

Cole released her first platinum record with her third release, Unpredictable, mainly thanks to the number-one R&B hit, “I‘ve Got Love on My Mind“. Originally an album track, the album‘s closer, “I‘m Catching Hell“, nonetheless became a popular Cole song during live concert shows. Later in 1977, Cole issued her fourth release and second platinum album, Thankful, which included another signature Cole hit,“Our Love“. Cole was the first female artist to have two platinum albums in one year. To capitalize on her fame, Cole starred on her own TV special, which attracted such celebrities as Earth, Wind & Fire, and also appeared on the TV special, “Sinatra and Friends.“ In 1978, Cole released her first live album, Natalie Live!

In early 1979, the singer was awarded a star on the Hollywood Walk of Fame. That same year, she released two more albums, I Love You So and the Peabo Bryson duet album, We‘re the Best of Friends. Both albums reached gold status in the U.S., reflecting her continuing popularity.

Following the release of her eighth album, 1980‘s Don’t Look Back, Cole‘s career began to take a detour. While Cole scored an adult contemporary hit with the soft rock ballad “Someone That I Used to Love“ off the album, the album itself failed to go gold. In 1981, Cole‘s personal problems, including battles with drug addiction, began to attract public notice, and her career suffered as a result. In 1983, following the release of her album I‘m Ready, released on Epic, Cole entered a rehab facility in Connecticut and stayed there for a period of six months.

Following her release, she signed with the Atco imprint Modern Records and released Dangerous, which started a slow resurgence for Cole in terms of record sales and chart success. In 1987, she changed to EMI-Manhattan Records and released the album Everlasting, which returned her to the top of the charts thanks to singles such as “Jump Start (My Heart)“, the top ten ballad, “I Live For Your Love“, and her dance-pop cover of Bruce Springsteen‘s “Pink Cadillac“. That success helped Everlasting reach one million in sales and become Cole‘s first platinum album in ten years. In 1989, she released her follow-up to Everlasting, Good to Be Back, which produced the number two hit “Miss You Like Crazy“; it also achieved international success, reaching the top ten in the United Kingdom.

Cole released her best-selling album with 1991‘s Unforgettable … with Love on Elektra Records, which saw Cole singing songs her famous father recorded, nearly 20 years after she initially had refused to cover her father‘s songs during live concerts. Cole produced vocal arrangements for the songs, with piano accompanimentby her uncle Ike Cole. Cole‘s label released an interactive duet between Cole and her father on the title song, “Unforgettable“. The song eventually reached number fourteen on the Billboard Hot 100 and number ten on the R&B chart, going gold. Unforgettable … with Love eventually sold more than 7 million copies in the U.S. alone and won several Grammys, including Album of the Year, Record of the Year and Best Traditional Pop Vocal Performance for the top song.

Cole followed that success with another album of jazz standards, titled Take a Look, in 1993, which included her recording of the title track in the same styling that her idol Aretha Franklin had recorded nearly 30 years earlier. The album eventually went gold while a holiday album, Holly & Ivy, also became gold. Another standards release, Stardust, went platinum and featured another duet with her father on a modern version of “When I Fall in Love“, which helped Cole earn another Grammy for Best Pop Collaboration with Vocals.

In 1995, Cole was awarded an Honorary Doctorate of Music from the Berklee College of Music.

In 1999, Cole returned to her 1980s-era urban contemporary recording style with the release of Snowfall on the Sahara on June and second holiday album The Magic of Christmas on October, which recorded with London Symphony Orchestra. A year later, the singer collaborated on the production of her biopic, Livin‘ for Love: The Natalie Cole Story with Theresa Randle playing Natalie Cole. She also released the compilation Greatest Hits, Vol. 1 to fulfill her contract with Elektra.

She changed to Verve Records and released two albums. Ask a Woman Who Knows (2002) continued her jazz aspirations, while Leavin (2006) was an album of pop, rock, and R&B songs. Her version of “Daydreaming“ by Aretha Franklin was a minor hit on the R&B chart. In 2008, seventeen years after Unforgettable … with Love, she released Still Unforgettable, which include songs made famous by her father and Frank Sinatra. In April 2012, she appeared on the Pennington Great Performers with the Baton Rouge Symphony Orchestra.