In Natalie Cole Part Two, I’ll be typing you about her albums and her awards, then later, her death. so please read on. I also have more photos and a new album, from iTunes for this blog. 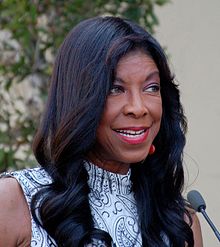 Cole pursued a career in acting. She appeared several times in concerts or other music related programs, including the 1988 Nelson Mandela 70th Birthday Tribute with sidemen Richard Campbell, Jeffrey Worrell, Eddie Cole, and Dave Joyce. In 1990, she and Al Jarreau sang “Mr. President“ on the television special Comic Relief special. After Johnny Mathis appeared on a special of Cole‘s in 1980, the two kept in contact, and in 1992 he invited her to be a part of his television special A Tribute to Nat Cole for the BBC in England. An album of the same name was released. In 1992, following the success of the Unforgettable: With Love album, PBS broadcast a special based on the album. Unforgettable, With Love:Natalie Cole Sings the Songs of Nat “King“ Cole received an Emmy nomination for Outstanding Variety, Music or Comedy Program. Cole received a nomination for Outstanding Individual Performance but lost to Bette Midler.

In 1993, she was among the guests of honor attending Wrestle mania IX at Caesar‘s Palace in Las Vegas. At the 65th Academy Awards she performed a medley of two Oscar-nominated songs: “Run to You“ and “I Have Nothing“, both performed by Whitney Houston in the film The Bodyguard. Cole made a number of dramatic appearances on television, including I‘ll Fly Away, Touched by an Angel, Law & Order: Special Victims Unit, and Grey‘s Anatomy. She had the lead role in the TV movie Lily in Winter. She appeared in the Cole Porter biopic De-Lovely. In 2001, she starred as herself in Livin‘ for Love: the Natalie Cole Story, for which she received the NAACP Image Award for Outstanding Actress in a Television Movie, Mini-Series or Dramatic Special. On the February 5, 2007, episode of Studio 60 on the Sunset Strip, Cole sang “I Say a Little Prayer“ at a benefit dinner. She sang the national anthem with the Atlanta University Center Chorus at Super Bowl XXVIII. In 2013, she was a guest on Tina Sinatra‘s Father‘s Day Special on Sirius Radio. The program included Deana Martin, Monica Mancini, and Daisy Torme reminiscing about their famous fathers.

Cole was married three times. She married Marvin Yancy, songwriter, producer, and former member of the 1970s R&B group The Independents on July 31, 1976. She had a son, Robert Adam “Robbie“ Yancy (October 14, 1977— August 14, 2017); he was a musician who toured with her. Marvin was her producer, and an ordained Baptistminister who helped reintroduce her to religion. Under his influence, Cole changed from a lapsed Episcopalian to become a devout Baptist. Cole and Yancy got divorced in 1980; Yancy died of a heart attack in 1985, aged 34. In 1989, Cole married record producer and former drummer for the band Rufus, Andre Fischer; they were divorced in 1995. In 2001, Cole married Bishop Kenneth Dupree; they divorced in 2004. In 2017, son Robbie died of a heart attack, aged 39.
Cole was active in the Afghan World Foundation cause, supporting Sonia Nassery Cole (no relation).

In 2000, Cole released an autobiography, Angel on My Shoulder, which described her battle with drugs during much of her life, including heroin and crack cocaine. Atone stage as an addict, Cole worked as a prostitute‘s tout in order to fund her drug habit. Cole said she began recreational drug use while attending the University of Massachusetts Amherst. She was arrested in Toronto, Canada, for possession of heroin in 1975. Cole spiraled out of control— in this phase of her life there was an incident in which she refused to leave a burning building, and another in which her young son Robert nearly drowned in the family swimming pool while she was on a drug binge. She entered rehab in 1983. Her autobiography was released in conjunction with a made-for-TV movie, Livin‘ for Love: The Natalie Cole Story, which aired December 10, 2000 on NBC and re-aired October 26, 2011, on Centric TV.

Cole announced in 2008 that she had been diagnosed with hepatitis C, which is aliver disease that is spread through contact with infected blood. Cole attributed having the disease to her past intravenous drug use. Cole explained in 2009 that hepatitis C “stayed in my body for 25 years, and it could still happen to addicts who are fooling around with drugs, especially needles.“
Four months after starting treatment for hepatitis C, Cole experienced kidney failure and required dialysis three times a week for nine months. Following her appeal for a kidney on the Larry King Show, she was contacted by the organ procurement agency One Legacy, in May 2009. The facilitated donation came from a family requesting that, if there were a match, their donor‘s kidney be designated for Cole.

Cole canceled several events in December 2015 due to illness. It was reported on January 1, 2016, that she had died the day prior at Cedars-Sinai Medical Center in Los Angeles. Her family stated that at the time of her death, Cole had “ongoing health issues“. According to Cole‘s publicist, Maureen O’Connor, the singer‘s death was the result of congestive heart failure. Prior to this final stage in the singer‘s life, Cole‘s last musical performance was a short set of three songs in Manila.
In official news on her cause of death, her family stated that Cole was diagnosed with idiopathic pulmonary arterial hypertension after her kidney transplant in 2009. Although Cole was clean and sober at the time of her death, her past intravenous drug use contributed to her demise.
Cole‘s son, along with her sisters, offered the following comment. “Natalie fought a fierce, courageous battle, dying how she lived … with dignity, strength and honor. Our beloved mother and sister will be greatly missed and remain unforgettable in our hearts forever.“
Cole‘s funeral was held on January 11, 2016, at the West Angeles Church of God in Christ in Los Angeles. David Foster, Stevie Wonder, Smokey Robinson, Lionel Richie, Chaka Khan, Eddie Levert, Mary Wilson, Gladys Knight, Ledisi, Jesse Jackson, Angela Bassett, Denise Nicholas, Marla Gibbs, Jackée Harry and Freda Payne were among the mourners at the funeral. After the funeral, she was buried at Forest Lawn Memorial Park in Glendale, California.

1992 A Tribute to Nat King Cole Herself (performing) BBC special.

2012 Nat King Cole: Afraid of the Dark Herself STARS/ENCORE.

The Grammy Awards are awarded annually by the National Academy of Recording Artsand Sciences. Cole received nine awards from 21 nominations.

1990 Best R&B Performance by a Duo or Group with Vocal “We Sing Praises“ ( withDeniece Williams) Nominated.

1992 Album of the Year Unforgettable … with Love Won.

1997 Best Pop Collaboration with Vocals “When I Fall in Love“ ( with Nat KingCole) Won.

2003 Best Pop Collaboration with Vocals “Better Than Anything“ ( with Diana Krall)Nominated.

The Latin Grammy Awards are awarded annually by the Latin Academy of Recording Arts & Sciences.