My favorite song of theirs is in the title of this blog, Standing On The Corner The Four Lads. I hope you don’t have to stand for long, periods of  time to read it, I’m sure that theirs chairs somewhere for you to sit, and read it instead.

The Four Lads is a Canadian male singing quartet. In the 1950s, 1960s, and 1970s, the band earned several gold singlesas well as albums. Its million-selling signature tunes include “Moments to Remember,“ “Standing on the Corner,“ “No, Not Much,“ “Who Needs You?“ and also “Istanbul.“. 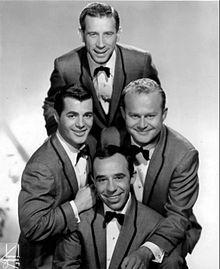 The original quartet grew up together in Toronto, Ontario, Canada, as well as were members of St. Michael‘s Choir School, where they learned to sing. The founding members were Corrado “Connie“ Codarini, bass (died April 28, 2010); John Bernard “Bernie“ Toorish (birthed March 2, 1931), tenor; James F. “Jimmy“ Arnold (January 4,1932— June 15, 2004), lead; and also Frank Busseri, baritone and band manager. Codarini as well as Toorish had actually formed a band with two other St. Michael‘s students, Rudi Maugeri and also John Perkins, that were later on to come to be founding members of another band, The Crew-Cuts.

The band was known variously as The Otnorots (taken from the name “Toronto“ spelledin reverse) and The Jordonaires ( not to be confused with a similarly named band, The Jordanaires, that was known for singing background vocals on Elvis Presley‘s hits). When Maugeri as well as Perkins left the band to focus on their schoolwork, Codarini and also Toorish accompanied Arnold and Busseri in a new quartet. At home, they practicedup until they accomplished their clean-cut harmonies, whether for spirituals, sacred music, or pop. They originally called themselves The Four Dukes however discovered that a Detroit band alreadyutilized that name, so transformed it to The Four Lads. In 1950, they started to sing in local clubs as well as soon were noticed by scouts. Recruited to head to New York, they were noticed by Mitch Miller, that asked them to do backup for several of the artists he recorded. One of these artists, Johnnie Ray,came to be a major hit in 1951 with “Cry“ and also “The Little White Cloud That Cried“ with the Four Lads backing him. In 1954 in Manhattan, the Four Lads had a recording session and decided they needed young voices. Lillian Pasciolla, as well as her friendthat was President of the Four Lads Fan Club were visiting and also were invited to sing “Gilly Gilly Ossenfeffer“ with them. They are both in the original recording together with the Four Lads.

Their first single was “The Mocking Bird“ on Columbia‘s Okeh label (master #ZSP -9710), released in 1952, with “I May Hate Myself in the Morning“ (#ZSP -9711) on the B-side. “ The Mocking Bird“ was re-recorded for release on the Columbia label twice in subsequent years.

In 1953, they made their own first gold record, “Istanbul (Not Constantinople)“, which launched them to stardom and kept them busy throughout the 1950sas well as 1960s in the U.S. and also Canada.

Their most well known hit was “Moments to Remember“ in 1955, and their next best known was “Standing on the Corner“, from the Broadway musical production of The Most Happy Fella, in 1956. A gospel album with Frankie Laine took them back to their origins as well as produced the hit single “Rain, Rain, Rain“. Their songs have actually appeared on countless compilation albums and also re-issues in the 1990s and 2000s.

Codarini was replaced in 1962 by Johnny D’Arc (that stayed with the Lads up until 1982), as well as Sid Edwards replaced Toorish in the early 1970s.

D’Arc died in 1999, aged 60. Arnold died of lung cancer in Sacramento, California, at the age of 72. Codarini died on April 28,2010, in Concord, North Carolina, at the age of 80. Connie likewise owned a restaurant since the early 1980s in Medina, Ohio, called Penny‘s Poorhouse, named after his wife. They came to Medina showing Great Danes and also did not leave until the restaurant was sold in 2007.
Today, a reconstituted band performs live.