You may like Elvis Presley’s version, but you haven’t heard Houndog, well in this blog, Big Mama Thornton Part One, you will finally hear it.

Willie Mae Thornton (December 11, 1926– July 25, 1984) much better referred to as Big Mama Thornton, was an American rhythm-and-blues vocalist and also songwriter. She was the initial to tape-record Leiber as well as Stoller’s “Hound Dog”, in 1952, which became her most significant hit, remaining 7 weeks at leading on the Billboard R&B graph in 1953 and also marketing nearly 2 million duplicates. Thornton’s various other recordings consisted of the initial variation of “Ball ‘n’ Chain”, which she created.

More than 100 musicians performed with Bill Haley & His Comets between 1952 and Haley’s death in 1981, many becoming fan favorites along the way. Several short-lived Comets reunions were attempted in the 1970s and 1980s, including one contingent (organized by Baltimore-based piano player Joey Welz, who played piano for the Comets from 1962 to 1965) that appeared on The Tomorrow Show, and another run by an Elvis Presley impersonator, Joey Rand (this group later lost a legal action over the right to use the Comets name)... 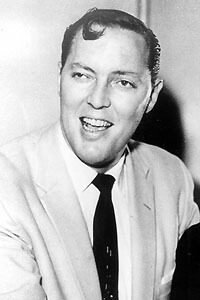 I’m going to type you that I didn’t think that I would go any farther than Part Three, but I’m almost done thanks to YouTube, I’m making sure my blogs have music, for why call it musical website without music. In this blog Rock ‘N’ Rollin’ Bill Haley Part Six, I’m typing about from the 1960’s to the 1980’s, which as a child, I didn’t know he went farther than the 1950’s, but I’m glad that I’m wrong. Here’s now Rock ‘N’ Rollin’ Bill Haley Part Six, I hope you enjoy.

By the late 1960s, Haley and the Comets were considered an “oldies” act. The band’s popularity never waned in Europe...

At the time I was in my teens. I thought Bill Haley was better than Elvis Presley, but how many times can you write songs with the word Rock in it and still be enjoyable ??? I moved on, to other bands and solo performers, it’s only recently(like seventeen years), that I started to like the 1950’s again, and Bill Haley was the first one that I had to buy his CD’s (vinyls were long gone), so when I had a chance to have a website. I was wondering how to put Bill Haley in it, and now you know(I got my website for The Beatles, but I haven’t gotten to my favorite decade yet), Rock ‘N’ Rollin’ Bill Haley Part Five won’t be the last one (thank you YouTube), for I found another album...

“Shake, Rattle and also Roll” adhered to, a rather bowdlerized cover variation of the Huge Joe Turner recording of earlier in 1954. The solitary was among Decca’s very successful documents of 1954 and also the seventh-best-selling document in November 1954.

Life Times Of B. B. King Part Five

After the termination of the continuing to be 8 programs of his 2014 scenic tour as a result of health issue, King revealed on October 8, 2014, he was back in the h...

Success as a solo singer

It’s been awhile,and i know it doesn’t matter to you, I thought I take a break from my website and try to put something new as I told you before. I’m updating my blog with my iTunes songs and I hope you don’t mind the complete album, something no other website has done. It’s the reason for doing my website in the first place. I know that those with Androids don’t have the ability to play music and I’m sure you want to hear some music Bing Crosby in The Life Times Career Bing Crosby Part Four.(only joking about an Android).

On September 2, 1931, Bing Crosby made his solo radio launching. Prior to completion of the year, he authorized with both Brunswick Records as well as CBS Radio...

Workshop cds
18
Collection cds
31
Songs
45
Soundtrack cds
2
This checklist is insufficient; you can assist by increasing it.

I cried when I knew that Chuck Berry died, for now I know Rock’N’Roll is really dead. In Legendary Chuck Berry Part Four, I’ll be typing about The Death Of The Father Of Rock’N’Roll.

Death And Also Funeral Service
On March 18, 2017, cops in St. Charles County, Missouri, were phoned call to Berry’s residence, where he was located less competent. He was noticable dead at the scene, aged 90. TMZ internet site published an audio recording in which the 911 driver can be listened to replying to a reported “heart attack” at Berry’s home.Berry’s funeral service was hung on April 9, 2017, at The Pageant, in Berry’s home town of St. Louis, Missouri...

Berry aided enliven a subculture … Even “My Ding-a-Ling”, a fourth-grade wee-wee joke that utilized to mortify real followers at university shows, allowed a great deal of twelve-year-olds brand-new understandin...