2013–present: Return to songwriting – Time and Another Country

In May 2013, Stewart released Time, a rock album of his own original material. It marked a return to songwriting after what Stewart termed “a dark period of twenty years”; he said that writing his autobiography gave him the impetus to write music again. The album entered the UK Albums Chart at number 1, setting a new British record for the longest gap between chart-topping albums by an artist. Stewart’s last No. 1 on the chart had been Greatest Hits Volume 1 in 1979 and his last studio album to top the chart was 1976’s A Night on the Town.
In September 2013, Stewart presented his close friend Elton John with the first Brits Icon award in a special show at the London Palladium, recognising...

I’m not much into music  and I’m not much into musical films of 1933, but I am into music and into films in the 1933, but not as my website is labeled for or what I want. The list of movies on this blog, is only for knowing what was made then, but that’s all what I’ll be doing about it. Any musical film that I like, I’ll be typing about, however if I have no interests in them, then what’s the point in digging into the background of it. Check on the next year, of 1934, and maybe I’ll find something a musical film that I like, until then, here’s my list of musical moves of 1933 !!!

1995–2001: New ventures and record labels
By the early 1990s, Stewart had mostly abandoned creating his own material, saying that he was not a natural songwriter and that the tepid response to his recent efforts was not rewarding. In 1995, Stewart released A Spanner in the Works containing a single written by Tom Petty, “Leave Virginia Alone”, which reached the Top 10 of the adult contemporary charts. The latter half of the 1990s was not as commercially successful though the 1996 album If We Fall in Love Tonight went gold and hit No. 19 on the Billboard album chart.
When We Were the New Boys, his final album on the Warner Bros...

This blog is all about musical films of 1932, now I’m not much into Musicals, but to talk about my second favorite topic on this (my website), which is music. So I have to type about music as well, or start another website (now there’s a thought), but their are some Musicals that I do like. Their aren’t on every year, nor not all are worth watching twice. Maybe, it’s because, their really one and the same movie, I mean, it’s girl meet boy, and try to win him in the end, with songs just added in to make you feel better about yourself and sell more tickets and more 78’s. For those that don’t know what 78’s are, I think it’s about time I should type you about it, but not here. This blog is about Musical Films Of 1932, and not how fast a single was... 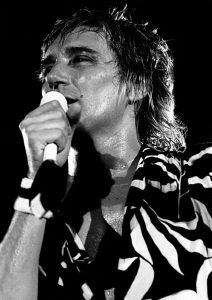 On stage in Dublin, 1981
In 1975, Stewart moved to Los Angeles. He released the Atlantic Crossing album for his new record company, using producer Tom Dowd and a different sound based on the Muscle Shoals Rhythm Section. Atlantic Crossing marked both a return to form and a return to the Top 10 of the Billboard album charts. The first single, a cover of the Sutherland Brothers song “Sailing”, was a number-one hit in the UK, but it only reached the Top 60 of the US charts. The single returned to the UK Top 10 a year later when used as the theme music for a BBC documentary series about HMS Ark Royal...

1969–75: Solo career established and Faces albums
Mercury Records A&R man Lou Reizner had seen Stewart perform with Beck, and on 8 October 1968 signed him to a solo contract; but contractual complexities delayed Stewart’s recording for him until July 1969. Meanwhile, in May 1969, guitarist and singer Steve Marriott left English band The Small Faces. Ron Wood was announced as the replacement guitarist in June and on 18 October 1969, Stewart followed his friend and was announced as their new singer. The two joined existing members Ronnie Lane, Ian McLagan, and Kenney Jones, who soon decided to call the new line-up Faces.
An Old Raincoat Won’t Ever Let You Down became Stewart’s first solo album in 1969 (it was known as The Rod Stewart Album in the US)...

In January 1964, while Stewart was waiting at Twickenham railway station after having seen Long John Baldry and the All Stars at Eel Pie Island, Baldry heard him playing “Smokestack Lightnin'” on his harmonica, and invited him to sit in with the group (which passed into his hands and was renamed the Hoochie Coochie Men when Cyril Davies died of endocarditis on 7 January); when Baldry discovered Stewart was a singer as well, he offered him a job for £35 a week, after securing the approval of Stewart’s mother...

For those who are first visitors to my website, I’m trying to be different than the rest. If you are expecting to have every singer, and band that has ever been made, well this website won’t do that, for this is my website and I search and dig deep for information about my favorite performers.

I’ll be going from year to year, so if you don’t see your favorite performers, then either I’ve forgotten and do them later, or not at all. That’s right year to year, and I will only text about anyone who either started their musical career, or their Birthday in that same year.

Once I do a biography of all the members in my favorite bands, I’ll be texting about that particular band, as well as celebrate their birthdays, on their day and hopefully when I have my website the next year, I...