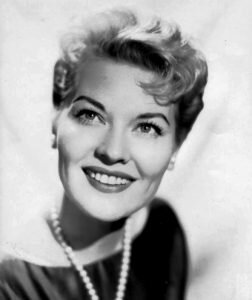 Clara Ann Fowler (November 8, 1927 – January 1, 2013), known by her professional name Patti Page, was an American singer of traditional pop music and country music. She was the top-charting female vocalist and best-selling female artist of the 1950s, selling over 100 million records during a six-decade long career. She was often introduced as “the Singin’ Rage, Miss Patti Page”. New York WNEW disc-jockey William B. Williams introduced her as “A Page in my life called Patti”.

Birth name
Clara Ann Fowler
Born
November 8, 1927
Claremore, Oklahoma, United States
Origin
Tulsa, Oklahoma, United States
Died
January 1, 2013 (aged 85)
Encinitas, California, United States
Genres
Traditional pop, country
Occupation
Singer
Instruments
Vocals
Years active
1946–2012
Labels
Mercury, Columbia, Epic, Avco, Plantation
Website
misspattipage.com
Page signed with Mercury Records in 1947, and became their first successful female artist, starting with 1948’s “Confess”. In 1950, she had her first million-selling single “With My Eyes Wide Open, I’m Dreaming”, and would eventually have 14 additional million-selling singles between 1950 and 1965.
Page’s signature song, Tennessee Waltz, was one of the biggest-selling singles of the 20th century, and is recognized today as one of the official songs of the state of Tennessee. It spent 13 weeks atop the Billboard magazine’s Best-Sellers List in 1950. Page had three additional No. 1 hit singles between 1950 and 1953, “All My Love (Bolero)”, “I Went to Your Wedding”, and “(How Much Is That) Doggie in the Window”.
Unlike most pop music singers, Page blended country music styles into many of her most popular songs. As a result of this crossover appeal, many of Page’s singles appeared on the Billboard Country Chart. Towards the 1970s, she shifted her career towards country music and began having greater success on its charts, ending up one of the few vocalists to have made them in five separate decades.
With the rise of Rock and Roll in the second half of the 1950s, traditional pop music began to wane. Page was among a small number of traditional pop music singers able to sustain success, continuing to have major hits into the mid-1960s with “Old Cape Cod”, “Allegheny Moon”, “A Poor Man’s Roses (Or a Rich Man’s Gold)”, and “Hush, Hush, Sweet Charlotte”.
In 1997, Patti Page was inducted into the Oklahoma Music Hall of Fame. She was posthumously honored with the Lifetime Achievement Grammy Award in 2013.

Clara Ann Fowler was born on November 8, 1927, in Claremore, Oklahoma (although some sources give Muskogee) into a large and poor family. Her father, B.A. Fowler, worked on the MKT railroad, while her mother, Margaret, and older sisters picked cotton. As she related on television many years later, the family went without electricity, and therefore she could not read after dark. She was raised in Foraker, Hardy, Muskogee and Avant, Oklahoma, before attending Daniel Webster High School in Tulsa, from which she graduated in 1945.
Fowler started off her career as a songstress with Al Clauser and his Oklahoma Outlaws at KTUL. Fowler became a featured singer on a 15-minute radio program on radio station KTUL, Tulsa, Oklahoma, at age 18. The program was sponsored by the “Page Milk Company.” On the air, Fowler was dubbed “Patti Page,” after the Page Milk Company. In 1946, Jack Rael, a saxophone player and band manager, came to Tulsa to do a one-night show. Rael heard Page on the radio and liked her voice. Rael asked her to join the band he managed, the “Jimmy Joy Band.” Rael would later become Page’s personal manager, after leaving the band.
Page toured with the “Jimmy Joy Band” throughout the country in the mid-1940s. The band eventually ended up in Chicago, Illinois, in 1947. In Chicago, Page sang with a small group led by popular orchestra leader, Benny Goodman. This helped Page gain her first recording contract with Mercury Records the same year. She became Mercury’s “girl singer”.

Pop success: 1946–1949
EditPatti Page recorded several songs with Al Clauser & His Oklahoma Outlaws (1946), the Eddie Getz Orchestra and the George Barnes Trio (1947).
Page recorded her first hit single, titled “Confess”, in 1947. Because of a strike, background singers were not available to provide harmony vocals for the song, so instead, Page and the label decided to overdub her own. Bill Putnam, an engineer for Mercury Records, was able to overdub Page’s voice, due to his well-known use of technology. Thus, Page became the first pop artist to overdub her vocals on a song. This idea would later be used on Page’s biggest hit singles in the 1950s. In 1948, “Confess” became a Top 15 hit on Billboard magazine, peaking at No. 12 on the “Best-Sellers” chart, becoming her first major hit on the pop chart. Page followed the single with four more in 1948–1949, only one of which was a Top 20 hit, “So in Love” (1949). Page also had a Top 15 hit on the Billboard magazine country chart in 1949 with “Money, Marbles, and Chalk”.
In 1950, Page had her first million-selling single “With My Eyes Wide Open, I’m Dreaming”, another song where she harmonized her vocals. Because she was overdubbing her vocals, Page’s name would be listed on the Pop charts as a group name. According to one early-1950s’ chart, Page was titled as “The Patti Page Quartet,” among others. Towards the middle of 1950, Page’s single, “All My Love (Bolero)” peaked at No. 1 on Billboard magazine, becoming her first No. 1 hit, spending five weeks there. That same year, she also had her first Top 10 hit with “I Don’t Care if the Sun Don’t Shine”, as well as the Top 25 single, “Back in Your Own Backyard”.

Towards the end of 1950, Page’s version of “Tennessee Waltz” became her second No. 1 hit, and her most-popular and biggest-selling single. “Tennessee Waltz” was originally recorded by country music band Pee Wee King & His Golden West Cowboys in 1947, becoming a major hit on the country charts for them in 1948. It also became a major country hit for country star Cowboy Copas around the same time. Page was introduced to the song by Jerry Wexler, who suggested she cover a recent R&B version by the Erskine Hawkins orchestra. Page liked the song and she eventually recorded and released it as a single. The song spent 13 weeks at No. 1 between 1950 and 1951. “Tennessee Waltz” also became Page’s second single to reach the country chart, becoming her biggest hit there, reaching No. 2. The song would later become one of the best-selling records of the time, selling seven million copies in the early 1950s, which prompted various cover versions of the song to appear on the charts during the year. “Tennessee Waltz” has also represented the biggest commercial success to date for the overdubbing technique, pioneered by producer Mitch Miller, which enabled Page to sound as if she were harmonizing with herself. Today, the song has come close to selling fifteen million copies. It also became the last song to sell one million copies of sheet music, due to the increasing popularity of recorded music. It was featured in 1970 in the American drama film Zabriskie Point, directed by Michelangelo Antonioni, and in 1983 in the film The Right Stuff.